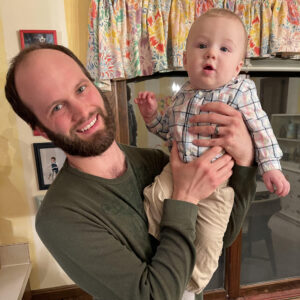 Before Your Eyes is a game that I probably would not have tried under normal circumstances. The visual novel genre is not one that I play very often, but there was a lot of buzz around the game when it came out. In the game’s coverage, what stood out to me the most is the game’s unique hook: the game is controlled entirely by blinking your eyes.

Blinking your eyes? How can that be? Before you begin, the game requires access to your computer’s or your phone’s camera. Once granted, you’ll be asked to calibrate the camera with your face by lining up your eyes with two dots on the screen. Make sure you’re comfortable during this part, because you’ll want to keep your head in that general location while you play. During play, the game focuses on those two dots you’ve aligned your eyes with, and detects whether or not your eyes are open or closed. It’s a little weird to advance the story and confirm selections by blinking, but It worked surprisingly well after I quickly wrapped my mind around it. I was able to play the game using a Logitech webcam I purchased back in 2015, so I don’t think the specs are very demanding – I couldn’t easily find required camera specifications online. Also, if you really had no camera at all, there is an option to operate the game with mouse clicks, but I think that would ruin some of the immersion I experienced during my playthrough.

Once you’ve done all your camera calibrations, the plot of this visual novel begins with you, Benny, as a soul being picked up by a ferryman (or an anthropomorphized “ferry-wolf,” if you will). He explains that you are now dead, and he has found you as a soul floating in a seemingly endless sea. You can look around and see many other souls floating in the sea around you, but the ferryman has chosen you in particular, because he has a hunch that you are special, and that you are ready to be presented to “the gatekeeper” at the top of a tower you can see on the horizon. After all of this exposition, the ferryman asks you to tell him your life story. He wants to know “what made you so great” while you were still alive. He needs to know because he’s going to present your case to the aforementioned gatekeeper that will let you into paradise. If your life story fails to impress the gatekeeper, the ferryman makes it clear that you will be punished. At this point, you begin to tell your life story using a large series of flashbacks. The title of the game immediately begins to make sense, as each scene of every flashback is progressed by blinking your eyes, with no ability to go back to a previous scene. This gives you a very real sense of your life flashing “before your eyes.”

Saying much more about the story would spoil the game entirely, so I’ll try to hold back. Once the story begins, there really isn’t anything that will likely blow you away in terms of graphics or gameplay. In fact, the first half of the approximately 2.5 hour game is admittedly pretty hokey. But a big twist occurs right in the middle that drastically shifts the tone of the experience. This twist gives a little more insight as to who Benny really was when he was alive, and – implicitly, from my point of view – even justifies why the first part of the game was as hokey as it was. The game’s finale makes an absolutely phenomenal use of the blinking mechanic, and you will definitely want some tissues close by. This one’s a tearjerker.

The reason I decided to write this review for the site in the first place is because I’ve been thinking about this question: What virtues can we learn from playing video games? At the end of the game, you discover that Benny’s view of himself and of his worth revolves around what he was able to accomplish during his time on earth. However, after the ferryman gives him some new perspective, he is able to learn the truth about what makes him valuable. I know this game in particular has many things it can teach us, but the most obvious one is the fact that our worth is not defined by our accomplishments. As a working adult, I face constant pressure every day to be productive at work, and am always posed with the question “What value are you providing to the team?” I think a lot of good can come from people if we all take a step back and realize that we are not defined by our job, our accomplishments, or our mistakes. Rather, we are valuable by the fact that we are all human beings with the ability to love, inspire, and to be inspired. What we do in this world is not nearly as important as who we are, or who we become. While the game really doesn’t dig into why this is (the fact that God’s love for us is the true source of pur value and our own ability to love in return), I think knowing and accepting that who we are is independent of our accomplishments can do a lot of good for a lot of people in today’s task-oriented society.

In the vein of inspiring, another lesson that can be learned from this game is that we do not need to change the world in order to inspire the people closest to us. There is a moment in the game where your mother is in dire need of encouragement. However, at this point in the game, you are not in a position to do anything close to a grand gesture. Yet, you are able to do one small thing for your mother, and as such, give her just the little push she needs to keep going. As a parent myself, this was a moment that touched me especially. It was a good reminder that even seemingly inconsequential actions, when done with great love, can change the world for those closest to us.

Finally, I found that I learned a lot from the depiction of Benny’s mother in this game. Over the course of the story, your mother really pushes you to be an outstanding piano player. At first, you can tell that she’s excited Benny is able to pick up the piano quickly, and she wants to capitalize on his natural ability. But her desire for Benny’s success quickly becomes an unhealthy obsession, and you’re able to experience the impact this obsession has through Benny’s eyes. His mother’s obsession is a large part of the reason Benny views his worth in terms of his talent and accomplishments. As stated before, we need to recognize our worth is in who we are, not in what we do. But it is just as important to realize this applies to our view of others’ value as well, especially when it comes to the relationships we have with our children.

I can’t say that there’s anything in this game that directly flies in the face of any Catholic teaching I’m familiar with. The game does spend a lot of time in a place we Catholics would compare to purgatory, so you might wonder how accurate this depiction is. No one knows for sure exactly what the afterlife looks like, but a brief definition of purgatory tells us that it is a “place or state of suffering inhabited by souls of sinners who are expiating their sins before going to heaven.” Considering what we learn about Benny by the end of the game, I think the game actually portrays a decent interpretation of purgatory. In the beginning of the game, Benny does not have a super-positive view of his time on earth – a trait that might belong to someone who might not be ready to enter into heaven. But after the ferryman presents Benny with some hard truths, and nudges him in the right direction, Benny’s state of mind changes into something we all might find more attractive. Not only do we get to experience this positive change from Benny’s point of view., but when the ferryman really puts stakes on Benny’s storytelling, it makes living through Benny’s story that much more uncomfortable. At a minimum, we should expect the process of expiating sins to be uncomfortable, if not outright painful.

Also, without giving too much away, the “gatekeeper” you encounter at the end of the game is anthropomorphized, similar to the ferryman. While I don’t think that’s a great way to depict God, there isn’t anything explicitly stating that’s who this is supposed to be. I personally thought of the gatekeeper more as an angel or angel-like entity, which made the depiction much more palatable. All in all, I found the game to offer a very inoffensive image of the afterlife.

Gameplay: 5 / 5 – the unique ability of blinking to control the game is probably what many consider to be a gimmick, but I really liked how it worked with this game’s message and themes in particular.

Visuals/Sound: 3 / 5 – The visuals are nothing to write home about, but serviceable to the game’s intention. I don’t remember anything I disliked, but nothing stands out in particular either. The voice acting is very well done compared to most games I’ve played, but probably not Oscar material.

Replayability: 3 / 5 – There are some Steam achievements and choices to be made that may require multiple playthroughs, but outside of that, there’s very little reason to play it again.

In short, I would recommend Before Your Eyes to anyone. Its intuitive controls (using just a mouse and your eyelids) make it a good fit for even those of us unfamiliar with games. The emotions and relationships explored in the game are probably relatable to a large audience. In particular, this game is great for anyone struggling with the fast-paced nature of today’s world. This game is a great reminder that our achievements as seen by the world are nothing compared to the love we can share with the people around us.

Hootz is an engineer by day, and a gamer by night. As a father of two, he’s excited to introduce his kids to the love of Christ, and the world of games. His biggest hope is that he is a great role model for all his children (future and current), so they will grow to be loving children of God.